Using Back Translation to Test Rendition of Colloquial Expressions 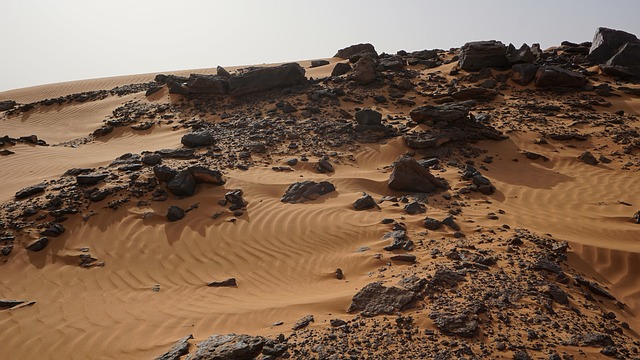 Using Back Translation to Test Rendition of Colloquial Expressions

Tayeb Salih is the greatest Sudanese storyteller whose writings have been translated to readers all over the globe. This study aims at examining the pioneering translation into English performed by Denys Johnson Davies' with emphasis on the rendition of conversational utterances as mainly displayed in Salih’s novel: The Wedding of Zein, known for involving challenges and complications due to inclusion and/or treatment of colloquial and cultural aspects and contexts.

Salih wrote his stories in an Arabic style in which standard and colloquial language have been blended to form one that would appeal to the senses of different levels of readers described by Pergnier (cited by Trablesi: 2000: 470, researcher’s translation) as:"We dispose of many languages: a correct and official one, another familiar one, a third vulgar, a fourth argotic, and we move with grand ease from one style into the other, at times in a nice medium of a phrase".  The present study selected colloquial translated statements and divided them into 3 groups: merely colloquial, vulgar and idiomatic. The products were exposed to back translation as a means to check- through the reproduced ratio and form of the original-  Johnson Davies’ degree of representation of the original.

Back-translation- obtained by retranslating a translated input into its original language- is proposed for this study as a viable method capable of: a) allowing a deeper insight into the rendition of materials at hand, b) facilitating a clear identification of and reflection from the differences between SL texts and TL products, and c) suggesting broader translational options and recommendations.

By weighing the sum of original information returned back conveniently, the method attempts to judge the current respondents’- as well as the ultimate recipients’- perception of the translated products. A package of selected relevant materials (translated statements .i.e., 10 each) representing the three linguistic levels is evaluated based on this question: “How much of the component of the SL has been rendered in the TL?” The results will be calculated for every group of sentences towards comparative insights. A larger percentage means, logically, more conformity of back-translated texts to Salih's original expressions and therefore favorable evaluation of Davies’ renditions.

To secure a successful and reliable employment of the method, a number of procedures have been taken into account:

1.3 Bases for Calculation and Evaluation of Produced Back-Translations

For calculation and evaluation of the reproduced works, the researcher applied the following criteria:

1.4 Descriptive Analysis of the Translators' Samples

The sample of the translators is composed of 30 respondents; the analysis of their collected data is achieved using various components and derivatives of the Statistical Package for Social Sciences.

Male respondents consitituted an overwhelming majority, .i.,e., 26.  However, this would in no way influenced  the responces since the sample was selected on purely competence basis, irrespective of sex type. Out of the 30 respondents, 17 were academitians and the remaining 13 were translators. This difference is too slim to mark a significant contribution to the display of any biased response to the presented material. Empirically, the responses of the two groups (translators versus academicians) were statistically compared. The analysis showed no significant difference in average rendering according to the profession of the back translator, as they both shared similar tendency towards standard translation for the 1st and 2nd groups of sentences, and achieved an average result for 3rd Group (Table 1). This finding is, in fact, only limited to this assignment’s utterances which are characterized by ordinary and non-specialized composition and cannot be extended to form any basis for the claim that any translational task can equally be rendered by both professional translators and academicians.

Comparison of Level of Translation between Academicians and professional Translators

1.5 Descriptive Analysis for the Translation of Data

The following tables exhibit the three groups of back-translated colloquial statements statistically analyzed to determine the minimum and maximum number of tokens rendered either to standard or colloquial origin. The mean factor is then calculated and the standard deviation is used to calculate the outcome. 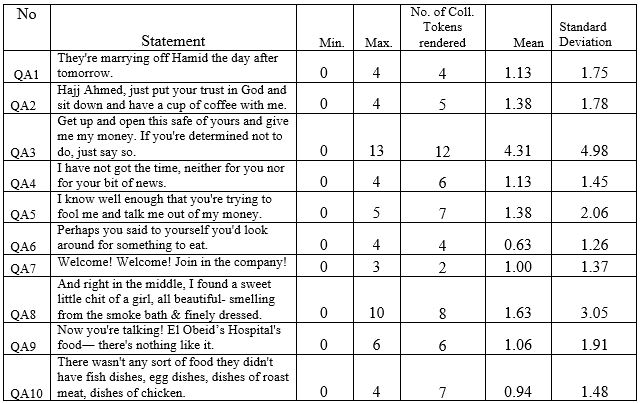 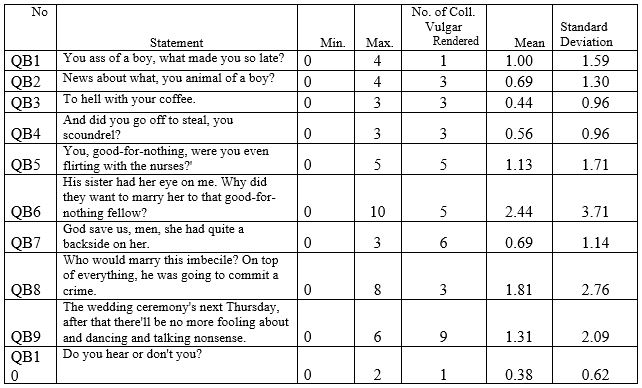 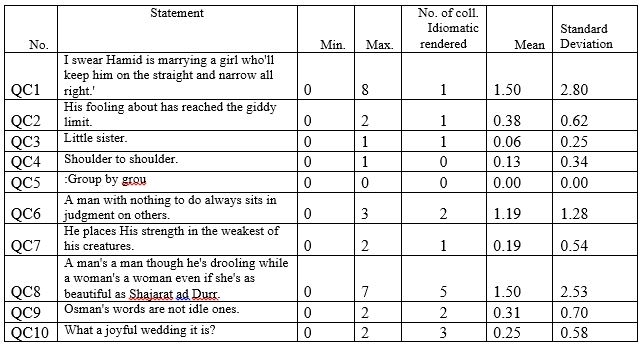 With an overall number of 61 colloquial tokens reproduced by the respondents for Group 1; making an average below the bench mark (approximately 31) the result is self- revealing and would lead to the conclusion that the respondents opted for a rather standard rendition of the presented materials. The results of both Group 2 (39 total number of colloquial tokens rendered by the respondents and a bench mark of 20) further consolidated this outcome, while Group 3 (30 rendered tokens and an insignificant bench mark of 8) would imply a tendency neither to standard nor to colloquial option.One reason to justify the latter outcome is the strategy available to back translators which enables them to reproduce the colloquially idiomatic statements with equivalent straight forward correspondents in the original language using relevant strategy.

Therefore, all the results fell below the average required to falsify the laid forward hypothesis: showing a tendency towards colloquial rendition of the material submitted for translation.

The researcher sought to understand whether or not the level of translation differed according to the type of materials translated. To test this hypothesis, one-way analysis of variance (ANOVA) technique has been used. The translation for the three groups (mere colloquial, coll. vulgar, and coll. idiomatic) has been compared. If the difference among these groups was found to be significant, a conclusion can be drawn that the level of rendition differs according to the type of statement translated. The results of the test are given in Table (5) below:

The Average Translation According to Type of Statements (n=30)

Table 5 shows that there is no significant difference in average rendition according to the type of translated statement whether it is colloquial, vulgar, or idiomatic (P-value > 0.05). This would mean that irrespective of the type of statement translated, the back- translators opted for a standard option in reproducing it.

To test the outcome of the back translation assignment- divided into the three distinguished material groups- the one-sample t-test has been used, whereby the average of rendition stated by respondents in each group has been compared to the total number of colloquial tokens in each group, for example, group A consisted of 61 colloquial tokens, rendering 31 out of this would mean that the respondents have just scored the average. This average has been taken as a bench mark to be compared with the actual translation undertaken by the respondents. If the average of tokens rendered is above this bench mark (namely 31 or more), we conclude that the level of rendition tends towards colloquial, and if it is below that bench mark, it would mean that back-translational reproduction favors the standard option. The results of the test are given in the Table (6) below:

The Average Translation for the Three Groups of Statements

What can be noticed from Table (6) is that:

Average Rendition and the Bench Mark for the Three Groups' statements

This study has attempted to examine the translation into English of colloquial expressions in Tayeb Salih stories using statistical tests for responses from back translators to weigh their impact on recipients. The empirical study revealed that the colloquial airs enshrined-in Salih's writings did not come across well in Johnson's translation. A rather fully representative- both linguistically and stylistically- fresher translations may be required to fill this.

It is hoped that this study could pave the way for investigating challenges resulting from the translation of other linguistic and stylistic levels and aspects in Tayeb Salih writings as well as carrying out further comparative investigation of such translations into other languages.

Davies, J. (2006). Memories in Translation: A Life Between the Lines of Arabic Literature. American

As part of empirical research for my PhD thesis, I am investigating the reproduction by translators of the following sentences, clauses and phrases classified into three groups of linguistic and stylistic levels. Please back-translate the same into Arabic. This will allow for analytical and comparative review with the originals in Arabic.