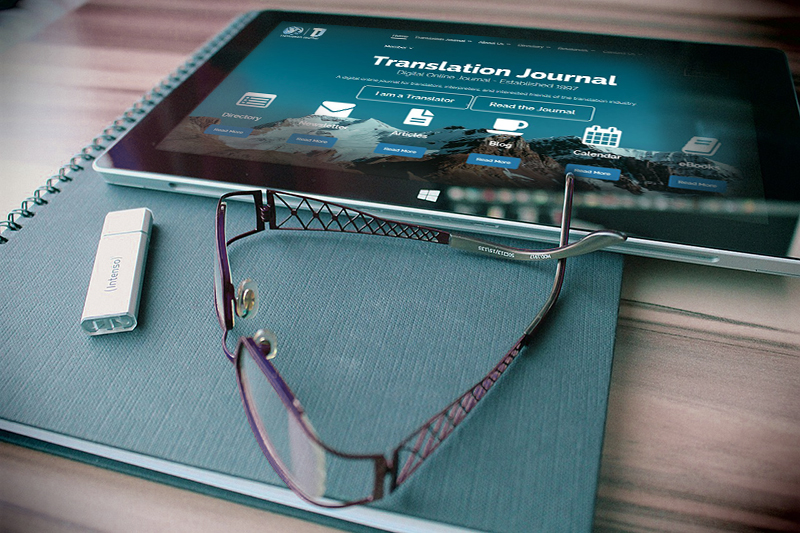 A bilingual person is the one who knows both the languages involved in the conversation and is able to understand as well as translate the same. So, the question will come to anybody’s mind that why such bilingual person cannot work as the interpreter! The logic is correct but practically a bilingual person would not be the right alternative for professional interpreter. 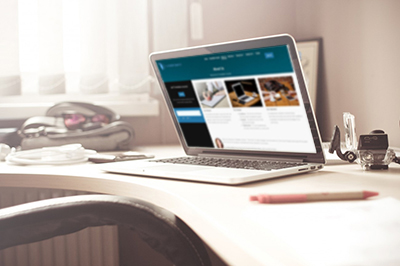 Keywords: Report on the Work of the Government; déjà Vu 2; corpus; quality evaluation

Halliday said in 1976 that text was used in linguistics to refer to any passage, spoken or written, of whatever length, that formed a unified whole (Halliday, 1976: 54). Wilss thought that different text had different target readers and different communicative function, and therefore different translation strategies should be adopted in translation (Wilss, 1982: 35). This paper is going to talk about how to translate the 2015 Report on the Work of the Government based on the parallel corpus. The Report on the Work of the Government should show the speaker’s certainty and authority. After the finishing of translation, we will evaluate the translation version.

2. Translating the 2015 Report on the Work of the Government

The availability of computer has led to the development of computer aid translation (CAT). There are different kinds of CAT software, and what the author use to translate the Report on the Work of the Government is déjà Vu 2. In order to facilitate the translation, there should be a term base (TB) and a translation memory (TM). The quality of my prepared documents determines the quality of translation.

Before the translation of the text, documents have to be prepared, including the source text (ST), parallel text and TB.

ST is the text needing to be translated and here the 2015 Report on the Work of the Government is going to be translated into English. Download it from People com cn, then clear the text by deleting the unnecessary. Usually, the type of ST can be *.pdf, *.doc, *.txt, *.ppt or others. In this paper, to satisfy the need of déjà Vu 2, we will save the text in *.doc type. 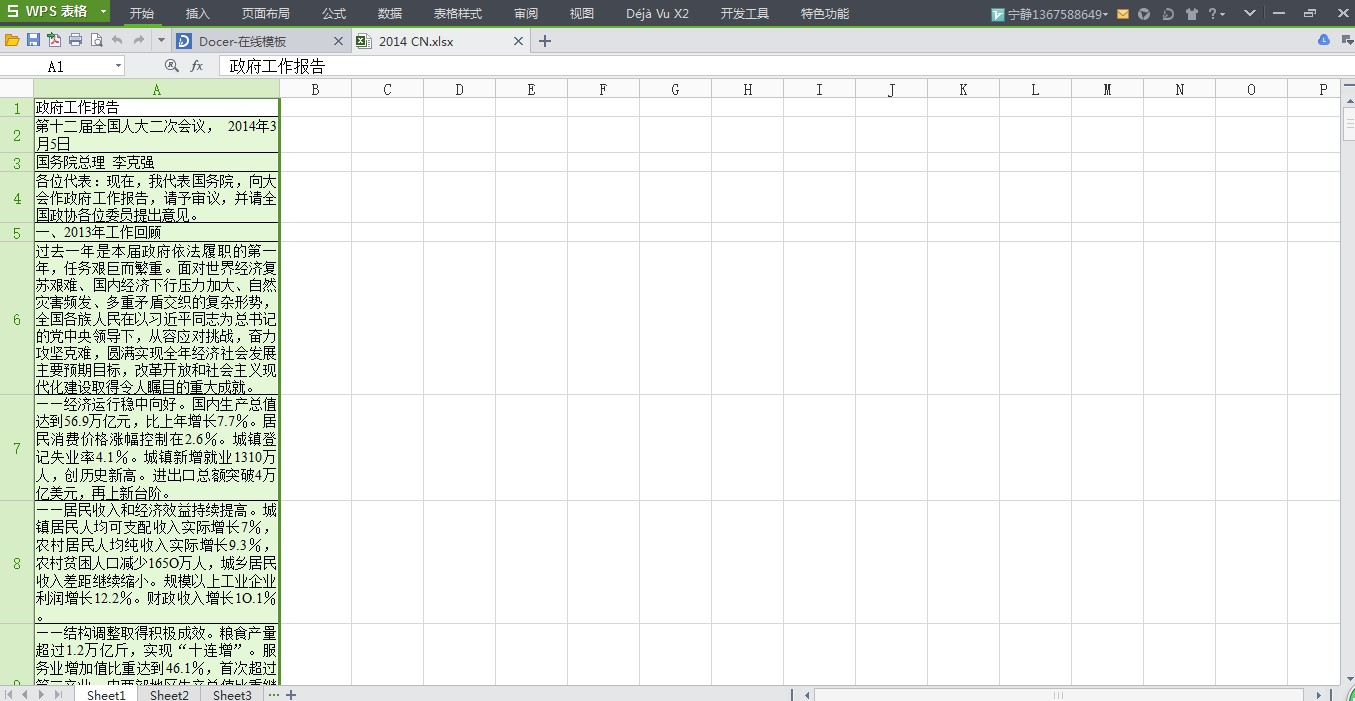 TB is the collection of terms about the Report on the Work of the Government. We can build a TB by ourselves or download it from the internet. I download the most common used terms, and parallel the Chinese with the English in excel. Then I import the excel to the déjà Vu 2, thus building a TB as shown in graph 3. 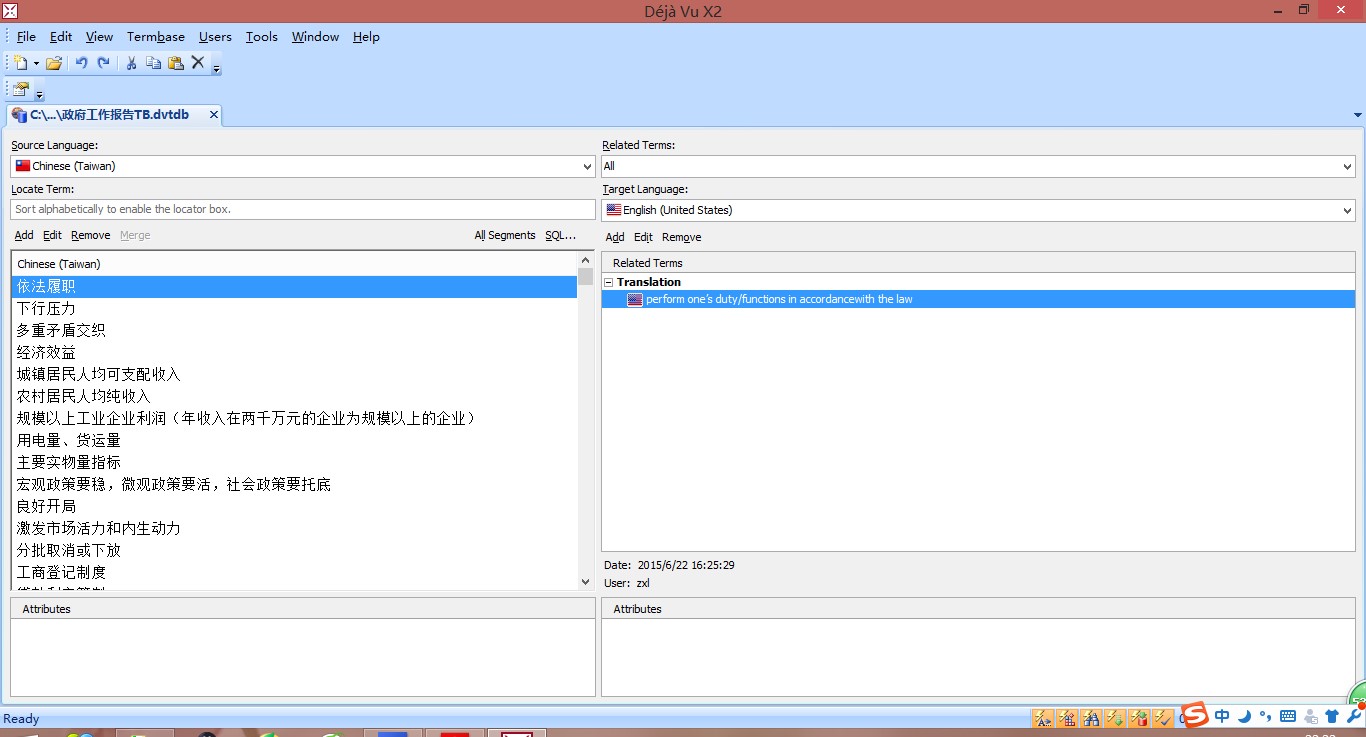 Now, the documents needed have been prepared well.

Build a new project with déjà Vu 2. The new project consists of the text which is going to be translated, TM and TB that we have prepared, client and subject. I build the project according to the guide, import ST, choose the source language as Chinese and the target language as English, and import TM and TB in order. 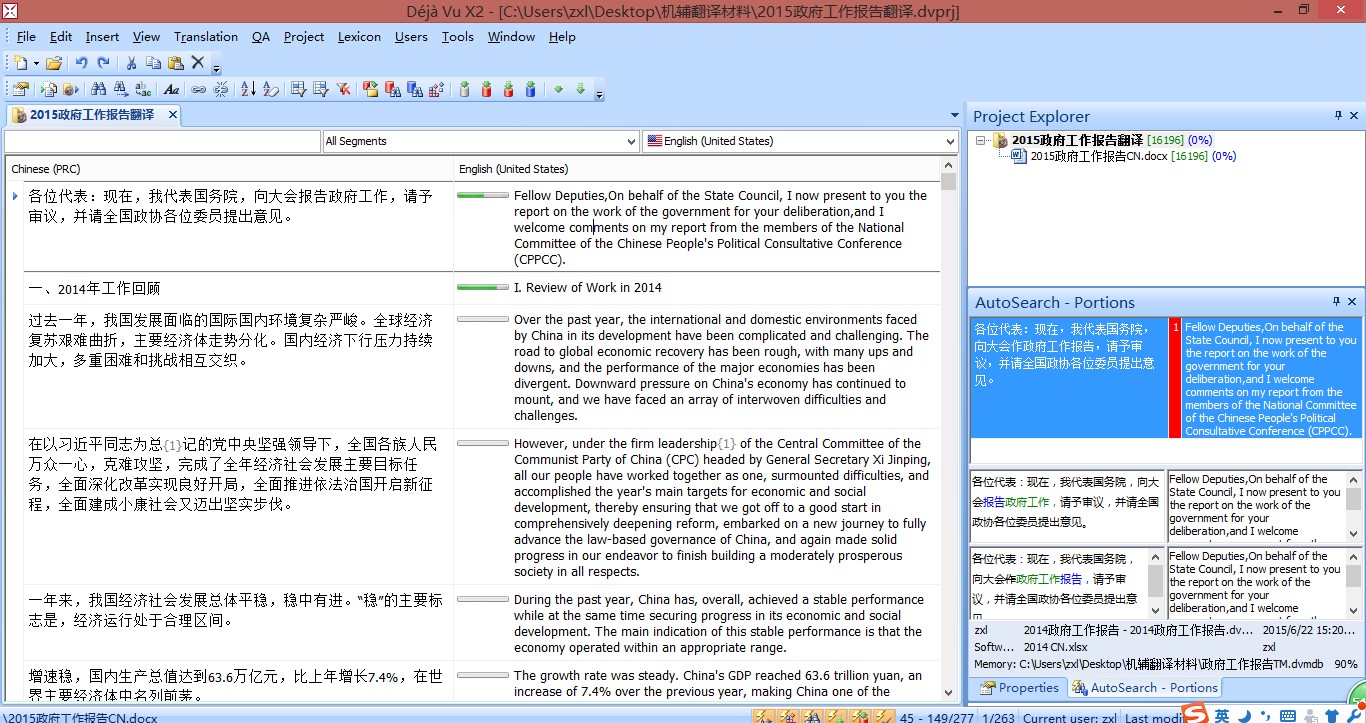 The software déjà Vu 2 has the advantage of pre-translation. With this function, some parts of ST will be translated based on the TM. Then we can translate the text one sentence by one sentence by ourselves with the help of the terms and the content of TM that show at the same interface. When we see something we can use in TM and TB, we enter Ctrl and 1 keyS at the same time, then the text will be translated automatically.

3. Quality Evaluation Based on Corpus

The sentences of text are linked by not only meaning but logics, and at the same time, these sentences are closely connected with context and culture in the process of constructing a text, so that message can be communicated effectively.

To know the contextual factors of the ST, and to ensure the cohesiveness of TT, translator must pay attention to three contextual factors, i.e. the linguistic context, situational context and cultural context. This means that, firstly, translation is a cross-culture activity, and language is an important part of it, but not all. Translation is not only about the language, but also about the related culture, society or culture, and the writers’ ideology or translational aim will have have influence on TT. Translator must keep in mind the reason, target population and means of translation. Secondly, different types of text have different aims. To achieve these different aims, different standardS and different means must be adopted. These two are also important standards of translation. 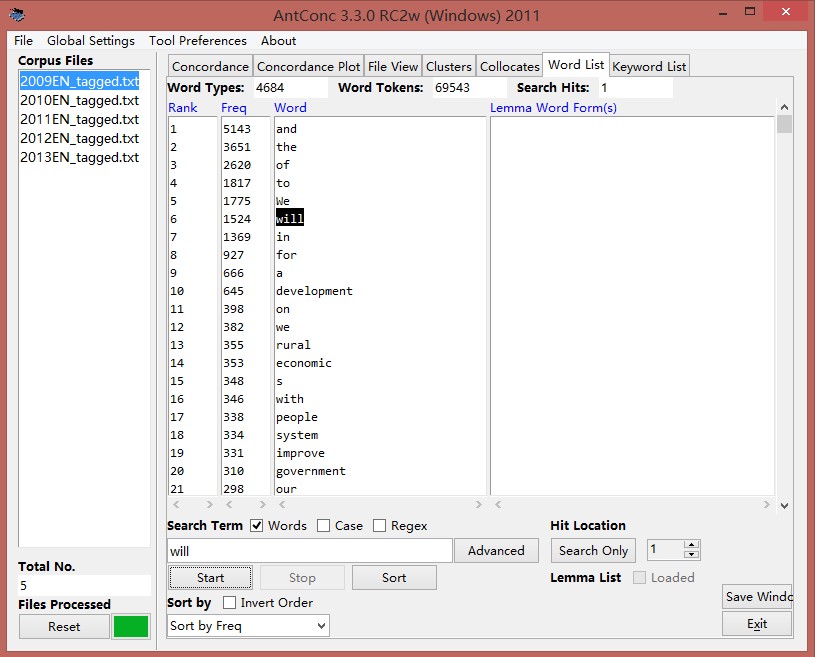 The table 1 shows that the five commonest modal words used in political essay are will, must, need to, can and should. The use of modal verbs in political essay extends dialogue room of discourse and strengthens the negotiability. Besides, some expressions that have the meaning of necessity or obligation like should, must, need to etc. enhance the authority of the Report on the Work of the Government. Moreover, the modal verb “will” is usually used to express the speaker’s certainty for future and the discourse authority (Liu, 2010: 152). In table 1, the majority in these modal verbs are the words that have the meaning of obligation or necessity, which fully illustrates the translation version’s certainty and authority. 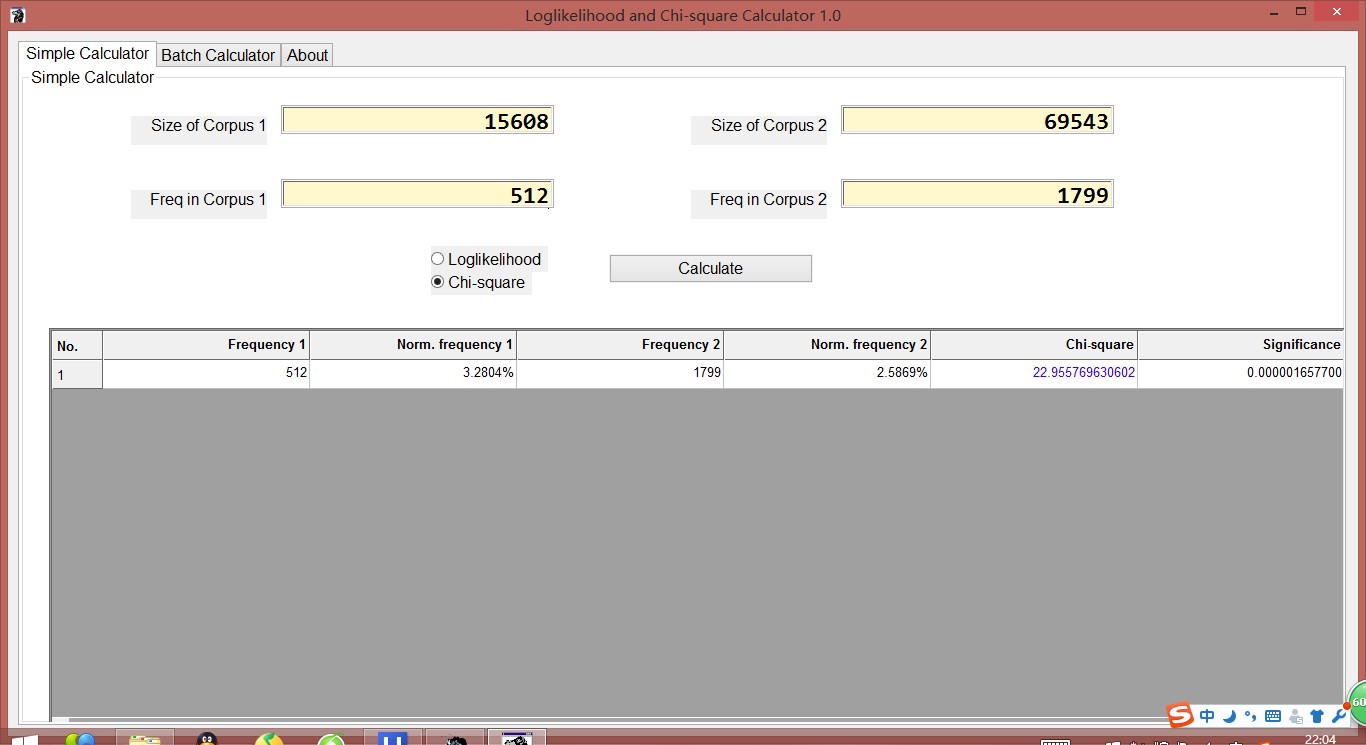 We can draw from the graph 7 that the significance is very small( p<0.05 and p<0.01). So that we can come to the conclusion that there is an obvious difference of the modal verbs between TT and the small corpus comprising the translation versions of the Report on the Work of the Government of from 2009 to 2013. Through analysis, we can find out that is because there are too many modal verbs in translation versions.

With the development of computer, CAT can be very useful to textual translation. To some extent, the software déjà Vu 2 is helpful for translating the Report on the Work of the Government, and the TT fully shows the government’s certainty and authority, but there are still shortcomings. Therefore, evaluation must be made to ensure the quality of the translation version, and the corpus will be an effective tool to look out the problems in translation version and improve the translation.