The Breach and the Observance : Theatre retranslation as a strategy of artistic differentiation, with special reference to retranslations of Shakespeare’s Hamlet (1777-2001) | e-Books

The Breach and the Observance : Theatre retranslation as a strategy of artistic differentiation, with special reference to retranslations of Shakespeare’s Hamlet (1777-2001) 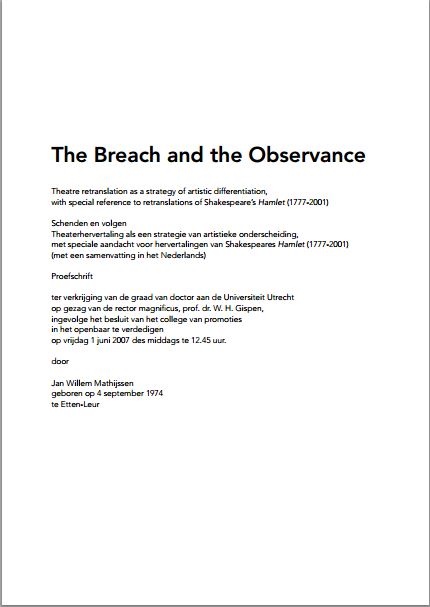 The subject of “The Breach and the Observance” is retranslation for the theatre. Besides offering a model that incorporates the findings of previous scholarship, it casts new light on the motivation behind retranslation, using the case of translations of Shakespeare’s Hamlet on the Dutch stage. The history of Dutch Hamlet performances shows a number of constants in the retranslation of the play. Since the establishment of a Hamlet tradition and the rise of the director’s theatre, the retranslations that functioned within the community of Dutch theatre were the fruit of the collaboration of translators with directors. Each translator changed its strategy towards at least one cardinal norm to be different from his theatrical predecessor. This new strategy formed an intrinsic part of the strategy of the director, who used the new text to support a new interpretation of the play that also differed from his predecessor’s. Staging a retranslation can therefore be said to be a strategy to differentiate a theatre production from previous theatre productions through the application of differing translational norms.