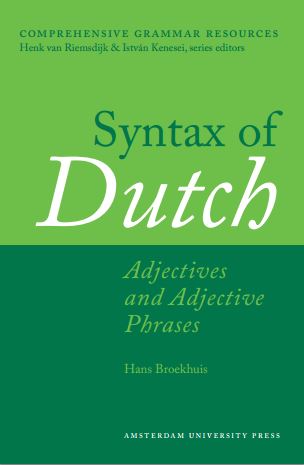 The Syntax of Dutch will be published in at least seven volumes in the period 2012-2016 and aims at presenting a synthesis of the currently available syntactic knowledge of Dutch. It is primarily concerned with language description and not with linguistic theory, and provides support to all researchers interested in matters relating to the syntax of Dutch, including advanced students of language and linguistics. The two volumes Nouns and Noun Phrases discuss the internal make-up as well as the distribution of noun phrases. Topics that will be covered include: complementation and modification of noun phrases; properties of determiners (article, demonstratives), numeral and quantifiers; the use of noun phrases as arguments, predicates and adverbial modifiers.