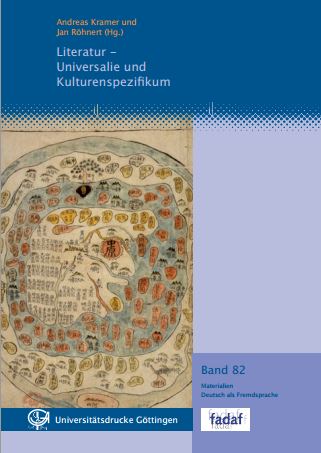 The debate on universals has been stimulated by advances in cultural studies and the humanities in general. Considering literature as a universal feature that can be found in any culture, the question is: a) what are the characteristics of literature as an anthropological constant? b) which specific occurrences of literature can be found in different times, cultures and languages – and how is it possible to compare them? c) How has literature been able to mediate over time between different cultures and their often opposing concepts? The wide field of literature transgressing and bridging borders comes into play here, e.g. translations, multilingual and “intercultural” literatures, travel journals and ethnographic interpretations. The main part of the anthology highlights the interplay of cultural impregnation and a universal motivation to express oneself by means of literature – by theoretical approaches as well as by studies with a view on German literature from the outside and/or a focus on the representation of the world in German literary texts. The closing chapter, “intercultural text workshop” enables the reader to gain insight into an ever more important feature of present-day literature: texts from authors who deliberately opted for German as their literary language – Marica Bodro i , Tzveta Sofronieva, Yoko Tawada, José F.A. Oliver and Ilija Trojanow.