Insights from book translations on the international diffusion of knowledge 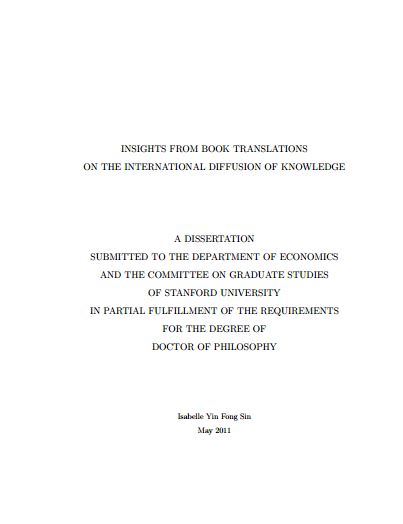 Increases in the stock of ideas possessed by societies are central to modern economic growth. The implications of idea flows are striking: Klenow and Rodr´ıguez-Clare (2005) estimate world production would be just 6% of its current level if countries did not share ideas. Yet, although theoretical economists have studied ideas and their diffusion extensively, empirical studies are scarce because ideas are inherently difficult to measure. Previous empirical studies of idea flows have tended to use proxies such as trade flows, foreign direct investment, migration, and patent citations. However, with the exception of the latter, these measures are not pure idea flows, and do not capture the key properties of ideas, namely non-rivalry and disembodiedness.