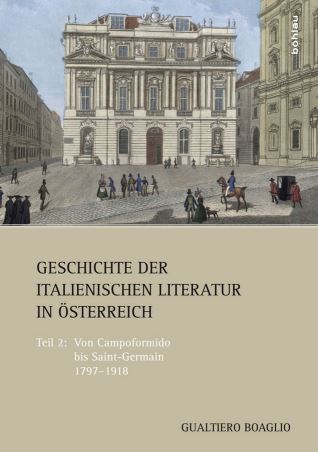 The present monograph focuses on the history of Italian literature and language in Austria’s Habsburg past, covering the period from the Peace of Campoformido between Napoleon and Francis II in 1797 to the end of the Habsburg monarchy in 1918. The study reveals that Italian court poetry was amazingly alive in the 19th century as it gradually had been adapted to the changes in the fields of politics, society, and the press. After analyzing the end of the golden era of Italian poetry in Austria, the author presents Archduchess Maria Beatrice d’Este and her literary circle. She was the last patroness of Italian artists and poets and kept up the old-style tradition of court poetry until her death in 1829. During the 19th century, however, this tradition faced an ever increasing popularization, with Italian language books and instruction getting more and more common. The Italian language was never discriminated against in the Habsburg monarchy. On the contrary, it was even extensively taught at universities because officials with a good command of Italian were needed both in the federal government and in the Italian regions of the monarchy. Moreover, the Habsburgs’ language policy favored the publication of quality papers and literary magazines in Italian. The study also deals with Italian school books and anthologies for schools in the Italian parts of the monarchy, which were usually written and published in Vienna. In the last part of this chapter, records of the future Emperor Franz Joseph’s Italian instruction are presented and analyzed on the basis of archive materials. Anachronistically, court poetry survived the 1848/1849 revolution and continued until World War I. The Emperor was popularized in jubilee editions, newspapers, and ceremonies, but also in the Italian poetry which was no longer of high quality, but still instrumental in presenting Franz Joseph as the “father of the nation”.