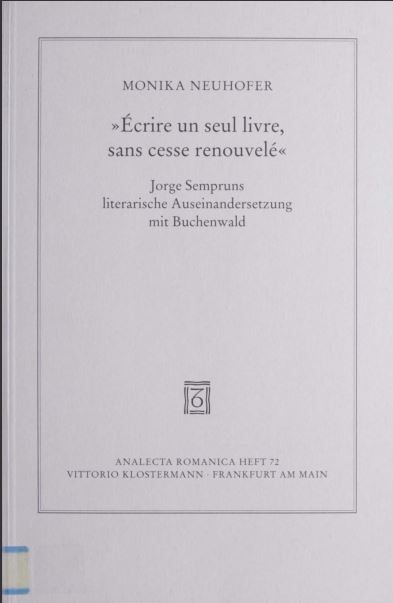 The study examines Jorge Semprun´s literary reflections on his experiences made in the concentration camp of Buchenwald in “Le grand voyage” (1963), “Quel beau dimanche!” (1980), “L´écriture ou la vie” (1994) and “Le mort qu´il faut” (2001) with the aim to show the development in his retrospective treatment of the past. Therefore the texts are not considered as a unified “ecriture” but as a progressing approximation to his experiences in Buchenwald.The study deals in narratological and poetological terms with Semprun´s growing awareness of what Buchenwald means to him: While “Le grand voyage” is deeply influenced by the authors communistic view. “Quel beau dimanche!” reflects Sempruns disconcertion caused by his awareness of the parallel existence of concentration camps in Nazi-Germany and in the Soviet Union. “L´ecriture ou la vie” and “Le mort qu´il faut”, for their part, are written by an author who considers himself as survivor and witness.This process is accompanied by Semprun´s shift to literature as a universe implying sense and creating identity. This becomes vitally important after his dissociation from communism and enables him to speak extensively about his experiences with death. Therefore Semprun´s conception of “witnessship” can be described as diametrically opposed to factual documentation. It is rather intended to function within a literary field: Only the intensive use of intertextuality allowes Semprun to comprehend Buchenwald finally as the centre of his life and as the origin of his own identity as well as to communicate his “truth” to the reader.