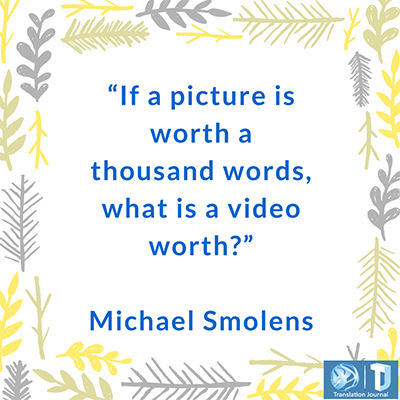 GALA 2016, the annual conference of the Globalization and Localization Association, was host to a number of highly informative, industry-specific sessions, including "VideosWithoutBorders — Storytelling and Messaging to the World," presented by lifelong philanthropist and entrepreneur Michael Smolens.

Smolens' latest start-up is Dotsub, described on its website as "a browser-based, one-stop, self-contained system for creating and viewing subtitles for videos in multiple languages across all platforms, including web-based, mobile devices, and transcription and video editing systems."

Drawing on his experience with Dotsub, Smolens demonstrated some of the many ways that translators as well as language companies can create global video campaigns to tell their stories to the world.

The power of video

Smolens began by emphasizing the universal role that storytelling plays in our lives. He noted that video is fast becoming the dominant medium for telling stories, as well as the most engaging and emotional way for brands to spread their messages. He posed the rhetorical question, "If a picture is worth a thousand words, what is a video worth?"

Emphasizing the need for language-enabled video content, Smolens stressed the importance of informing viewers of the level of the translation they are watching, such as machine, crowdsourced, professional, or MLR-certified for medical, legal, and regulatory purposes. He showed a video with a dropdown list of available subtitle languages, each followed with "human," "machine," "human (pro)," or "medical," depending on the type of translation available. He pointed out that a doctor would not want to write a prescription based on a machine translation. Similarly, company marketing collateral would likewise require human (pro) translation level to foster a lasting positive customer experience..

Smolens went on to talk about Dotsub's numerous charitable endeavors. In 2015 Dotsub, together with BNP Paribas and the United Nations, was a partner of the 11th Annual Mobile Film Festival. The theme for the one-minute films was climate change, and participants were able to film in the language of their choice and then subtitle their works using Dotsub. Smolens shared examples of the final works, including the powerful winning film

Getting the word out

Smolens credited Dotsub with the creation of products that enable brands to better engage with their customers, resulting in increased revenue for translators and increased visibility of innovative products both already in existence as well as on the horizon.

One such product which many people are unaware of is same-language subtitling. Especially useful in cases where there are no funds available for translation, same-language subtitles use karaoke-style highlighting (word by word as they are spoken) on subtitles that appear in the same language as the video itself, helping non-native speakers of the given language to better understand the content.

Smolens also shared a text-to-speech translator currently being developed. He acknowledged that voiceover is more expensive than subtitling, but brought up the sobering fact that 20 percent of the Earth's population is illiterate, making a device that can speak subtitles in the user's language a phenomenally important tool.

In closing, Smolens touched on revenue generation and pricing. He discussed the amazing cost benefits of utilizing user-generated content, including but not limited to crowdsourcing. And he named the two things that he believes best motivate people to volunteer their time on the web: recognition and reward. Through the proper use of these two incentives, everybody wins.

Smolens also suggested a simple way for translators to generate additional revenue: offer to localize existing clients' videos into the same languages already being used for translating their documents, websites, and so forth. Clients may not have requested this and other services simply because they don't know they exist. So make them aware of the possibilities!

More information about Dotsub is available at Dotsub.com. Michael Smolens' GALA 2016 session "VideosWithoutBorders — Storytelling and Messaging to the World" is available in its entirety on the GALA website. Access to the conference video is free for registered attendees of GALA 2016 and $60 for non-attendees.